MIDI is the acronym for Musical Instrument Digital Interface. In short MIDI is machine code that tells a MIDI capable instrument what to play and how to play it. There’s a lot more to it, but that is the general idea. If you want all the gory details you can start with this Wikipedia article and go from there.

Here is my low budget version of events.

Way back in the 1980s MIDI was developed by several of the leading electronic keyboard manufacturers to enable synthesizers to talk to each other. By using this communication you could control a whole bank of synths from one keyboard. Eventually somebody invented the sequencer – a machine that did nothing but store and transmit MIDI data. With a sequencer you could program an entire song – or entire concert – into the machine and have the machine play back the data through your bank of synthesizers.

When personal computers were developed in the 1990s the advent of the software MIDI sequencer was at hand. 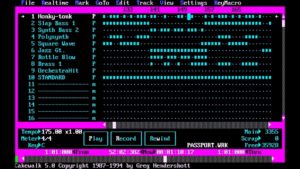 With the computer’s faster processing speed and larger memory capacity, there was virtually no limit to what electronic musicians could do with MIDI. Alongside the development MIDI sequencing on the computer, the gaming industry arose, and right along with that came the joystick port/soundcard interface. The joystick port allowed for hooking up a controller device for playing the games and the soundcard allowed for all of the wonderful sound effects and theme music to be played back through a set of speakers or headphones. Along with these two functions, soundcard manufacturers began including a basic MIDI capable synthesizer chip in their designs. It wasn’t long before people figured out that you could use a sequencer to build a MIDI file and have that file play back using the computer’s soundcard synthesizer.

Today, MIDI has pretty much fallen out of favor with the general public due to the oversaturation of pop and classical music files that were everywhere on the internet for years. MIDI is seen as some sort of cheesy sounding audio file that starts playing when you open somebody’s personal website and threatens to get you in trouble for surfing the internet at work. Among musicians, however, MIDI is still going strong. With the continued development of sound samples and sequencing software you’re hearing quite a lot of music (especially in films) that started life as a MIDI sequence.

In the mid 1990s when I first got online, I quickly started looking for other Zappa fans. In the process of searching out the Zappa community, I discovered that it was a “thing” to create MIDI versions of Zappa’s music. Of course, my first thought was, “I can do that!” So I set about putting together some of my own MIDI versions of a few of my favorite pieces. What follows is the results of my indulgence. Each file has been rendered to mp3 using Reaper and the Edirol HyperCanvas VST.

Originally constructed using Cakewalk 5.0 for DOS on an old IBM 286 computer. I started by step entering the drum track and ostinato out of the Frank Zappa Guitar Book. I then played the lead lines into the sequencer in real time using an old Kawai General MIDI keyboard.

Originally constructed using Cakewalk 5.0 for DOS on an old IBM 286 computer. I had to put this one together entirely by ear and using a combination of step entering the raw data and playing parts in on my Kawai keyboard.

Originally constructed using Cakewalk 5.0 for DOS on an old IBM 286 computer. Somebody had already constructed a basic MIDI version of the melody for this piece based on a transcription that appeared in a keyboard magazine. I took that basic file and began rearranging it to fit the Zappa In New York Easy Teenage version. I then went to work constructing the rest of the arrangement starting with the drums, then bass, then the remaining instruments.

Originally constructed using Finale ’98 on a Pentium computer running Windows 95. I once again consulted the Frank Zappa Guitar Book for the melody and entered the notes into the notation program. Once I had that basic track I constructed the drum and bass tracks by ear and added the piano part from my imagination.